The Art of Impossibility

I would never die for my beliefs because I might be wrong.
-Bertrand Russell 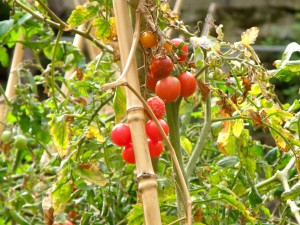 Did you know that the delectable and delicious tomato was once believed to be a deadly poisonous nightshade and was even associated with witchcraft?

And that in Papua New Guinea, some tribes believed babies were made bit by bit with repeated—as often as a man could manage—intercourse? (Okay, not such a bad belief … sounds like humping happiness to me.)

At an intimate celebration with a wonderful artist couple I know, I told them of a neurotic boyfriend I once had for a wee time who wore a hoodie to bed in July in +30 degree weather. He believed that if he caught the slightest breeze, he would fall ill and die because he had a minor (I’m guessing imaginary) throat tickle.

My friend blanched and confessed she too wore a hoodie to bed. What!? She is from Yugoslavia and she told me how she was cautioned her whole life to avoid drafts at all costs. If she was caught sitting on the ground, her aunts would scream at her to get up because she would surely be barren and have health issues due to the cold. She is always careful to cover her hip area and wears massive amounts of neck and headgear in winter. Her culture even has a specially designed knit “skirt” to protect a woman’s womb. These are often gifted to brides from their grooms instead of lingerie.

I asked what her aunts and mother would think of my 365-day-a-year habit of having a window wide open and sometimes even a fan blowing on me while sleeping nude.

She was visibly mortified. It would be akin to medical heresy and almost certain death.

Human belief is a subject that absolutely fascinates me. I am a seeker of the secret to permanently changing dysfunctional beliefs—the kind that hold people back from living their biggest and best life. Many experts in psychology and human behavior believe that our beliefs create the outcome of our lives implicitly. As an example, my friend above now has recurring kidney and bladder troubles.

A new friend of mine is a life coach and we’ve had a couple of deep discussions on the immense power of our beliefs. We hear old adages like “Whatever the mind can conceive and believe, it can achieve” (Napoleon Hill) and think ya, ya. That’s okay for those guys but I’m too old or too broke or too tired or have too many responsibilities to dream. I don’t have a degree, or the talent, or the looks.

We are surrounded by impossible things that are now possible: iPods and iPhones; bionic limbs; and electric cars. Big thinkers don’t let obstacles or small thinking get in their way to achieving incredible things. And you can bet that when something doesn’t work for the innovators of the world, they change their strategy. They transcend their doubt and in spite of the effort, blood, sweat, and tears involved, they just do it.

For me, the past often pulls and tugs at my dreams, dragging them down into the murky land of impossibility. There are many recollections of falls that are tattooed into my brain. Alert! Alert! Remember … the last time you did that, this happened.

Think about some of the things you’d like to do, be, or have. Consider things you’ve placed on a shelf someplace in the recesses of your mind because they seemed impossible. Then watch Aussie Nick Vujicic in action.

Nick was born with a rare disorder which left him limbless. It seems like one of the biggest hurdles a human being could face. Nick had his share of struggles and emotional turmoil as a child and teenager and contemplated suicide at age ten, but at seventeen founded his own non-profit called Life Without Limbs.

Nick began a career as a motivational speaker. In polls, our fear of public speaking outranks our fear of death because of looking foolish or public ridicule. Imagine finding the courage to speak to huge audiences when you are limbless.

Nick has adapted beyond what I’m sure anyone could have imagined. He has two toes that he writes, uses the computer, and cooks with. He swims (yes, swims), plays golf, soccer, and has skydived.

I have moments when I feel there must be something fundamentally wrong with me to remain single for so long and that finding love is an illusive fantasy. Nick dreamed of meeting the love of his life and then met a beautiful girl named Kanae Miyahara and married her in February of 2012. This February, one day before Valentine’s Day, they had a healthy baby boy.

Now reach into your mind’s eye again and consider some physical feat you’ve imagined yourself doing, but have decided is absolutely unachievable. Then ponder the scientifically “impossible” achievement of Diana Nyad.

On September 19th of this year, 64-year old Nyad set a world record by swimming from Cuba to Florida’s coastline—without a shark cage.

It was her fifth attempt and she’d not swam for 30 years when she began training at age 60. On her third attempt she was bitten by the deadly box jellyfish and began to go into respiratory shock. That alone would be enough to send the toughest packing.

I listened to Nyad eloquently speak this week on Oprah’s part one of the interview. The things that are involved and the team of experts one requires to attempt such a swim are mind-blowing.

What happens to a human body when immersed in salt water for that period of time (53 hours) and exerting that much energy is utterly frightening. Physiologists determined that, by all of their calculations, based on her age and all stats about the navigation data, it could not be done.

Nyad came out of the water badly dehydrated and looking like a beat up blowfish, yet less than 72 hours later she was laughing and powerfully orating her tale at a press conference.

What medicine and science is unable to measure is the human spirit and will. It’s gone awry countless times when predicting when someone will die of an “incurable” disease or what a human is capable of achieving. There is a force we all have access to that defies logic.

Diana Nyad achieved the impossible at age 64 because she believed she could. Nick Vujicic changed his perspective and decided that he could create a full, beautiful life in spite of incredible odds against it and he is living that big, bold life, with hundreds of thousands of fans in his wake.

We love stories of amazing achievements and wildly impossible things happening, but in our own lives we have a tendency to put a big lid on what’s possible. A lot of times we project what is involved to attain something and decide in advance that we don’t have what it takes.

I can’t wait to read David And Goliath: Underdogs, Misfits, and the Art of Battling Giants by one of my favorite authors, Malcolm Gladwell. In it he tells stories of ordinary people who achieve extraordinary things. He too is fascinated with discovering what lies beyond the studied and proven “facts” about the human capacity.

I still don’t know why some people are able to shed their doubt and rise above their limitations with such grace while others of us are ambushed by our fatigued misgivings.

What I do know is never underestimate yourself. Inside you is a reservoir of astonishing ability and endurance that just needs to be let loose from the cement of disbelief.

I leave you (and me) with a poem I wrote in one of those times when I needed to access that well within.

A formidable courage resides inside you

The path to your dreams is sometimes treacherous

But cast aside the shroud of skepticism

Ask your imagination for the stepping stones to your aspirations

You have but one fleeting moment here with two choices:

The dark imprisonment of I can’t

4 Responses to The Art of Impossibility