Who Wants to be an Entrepreneur?

Entrepreneurship is the last refuge of the troublemaking individual.
—Natalie Clifford Barney 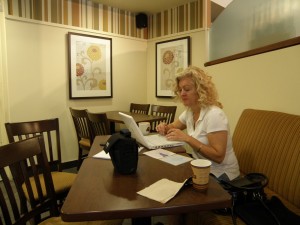 Who wants to be an entrepreneur? I do, I do!

When the road is so often wrought with difficulties, endless hours, financial scurvy, and seriously hard work, why? The reason I want to be a full-time writer has to do with a creative calling that won’t go away. But the reason why I want to be an entrepreneur would have something to do with my lifelong career in sales. I’ve fantasized about creating a Dilbert-style comic strip about a sales rep named Wanda, her adventures on the road, and the amazing absurdity she’s been privy to.

Don’t get me wrong—it wasn’t all bad. I think of my sales career in three eras: Pre-Ron, Ron and Post-Ron. Ron P. was the innately wisest leader/boss I’ve ever had the pleasure to work with. This was a man who embodied the elusive qualities of balance and impeccable common sense. He ran his prosperous company without drama. When things went sideways, he remained serene, knowing that business means sometimes you win and sometimes you lose. He never belittled or abused his employees in any way. He knew if you were an asset and a worthy employee and rewarded you handsomely.

My first year with the company I was given an unprecedented 35% raise. Like most people, I blossom when compensated for my abilities and efforts and his recognition garnered my deepest loyalty and dedication. In the cycle of win-win, he would unofficially add weeks of paid holiday time and grant me extras, like an all expense paid ski trip with he and his wonderful wife. When he called me his only no-maintenance rep, I worked even smarter to prove it so. Above all, I valued his trust in me.

I also had many abundant years of fine dining in the best restaurants all over Canada and the USA (and I love good food and vino) and staying in luxuriant hotels with the finest amenities. Trade shows were hard work but we were richly cared for in my stationery rep days. I earned bountiful bonuses by hitting or exceeding quotas and thrived on spiffs (prizes), winning a home full of goodies and trips. That’s what kept me in sales for so very long.

However, you pile layer upon layer of the other not-so-bright managing styles, crazy-assed people, and insane experiences and, finally, enough is enough. Even though I feel I’m closer to living under a coconut tree in Mexico than anything else, running my own show autonomously beckons like a distant lighthouse in a turbulent sea. Below is just a smattering of experiences spanning a long and memorable sales career. When Dr. Seuss told me, “Oh, the places you’ll go,” I could not have imagined … 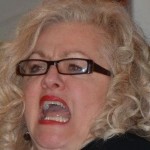 A young, fresh-faced blonde target, I was assigned to a seasoned sales vet at my first job—Irvin, the overfed 63-year-old rounder from Montreal (this was an industry term for a slick, been-around-forever, used car salesman type). On my second week at the job, we were headed to a customer’s home in a rural area and Irvin stopped his cream-colored Cadillac on the side of the road.

“So, when I go to Montreal next week, will you miss me?” he said, jowls flapping in the summer breeze.

“Will you miss me?” (To give you an idea where this ranked on the grossness scale, my father was in his early 40’s at the time.)

“I just want to let you know you could make a lot of money working with me and you wouldn’t actually need to work,” he said. He then lunged at me with his liver-lips, planted a disgusting wet one, and grabbed for a handful of boob.

Thank God I was thinking on my toes. I immediately screamed at him, “My boyfriend is a gun-toting hunter who rarely misses a shot. If you don’t start the car and take me back this instant, I swear, I’ll have him shoot you!”

With that, the randy old goat started up the car and skidded off, gravel flying and the fear of being hunted and shot evident on his sagging mug.

The management took care of old Liver Lips and he ended up moving back to Montreal in humiliation. I was then assigned to a wild woman who could sell waterproofing to a duck. She was six years older and worldly and taught me many important things about being a woman and about the fine art of selling. She did, however, use my rookie status to turn me into her personal ‘Driving Miss Daisy’ assistant while she slept on long hauls and made me wait endlessly while she took care of her personal agenda. I finally put my foot down when one day after a week on the road, she asked me to sniff her pants to see if they were fresh enough to wear again. 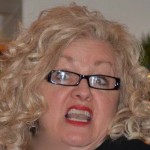 My first week on the job, we went on the road far up north for five days. On the highway to High Level she had to pull over because she thought she’d sharded in her pantyhose. Nice, I thought.

Later on in Peace River, she dragged a random rigger she’d met in the bar back to our room and played hide-the-hotdog with him the bathtub. I had to keep five years worth of these antics (which she insisted on telling me) to myself because our manager was her best friend! If only the Mennonites who owned the company had any clue.

I pitched myself with a Power Point presentation for a position I’d basically invented at an innovative New York-style gallery. It was an awesomely creative job where I worked with talented and cool artists, but as time went on, I discovered the owner was an unmedicated bi-polar with no appropriate workplace filters. He was a solid businessman one day and a ballistic banshee the next. Much to the utter shock of the receptionist—and myself—he came into my office one day, veins popping, screaming at me about something completely unrelated to my work or me. Ten minutes later he came back in as soft as a Care Bear and asked if I wanted to go to lunch. He-llo. I declined renewal on that contract without looking back in the rearview mirror.

At my next job, I was hired by a good ol’ boy from the Southern States. He was a pleasant enough fellow, but his leadership style and motivational skills were sorely lacking. He once fired a new regional sales manager (my 4th in two years) while they were on the road in Canada working with me.

I was thrilled when Tex announced, two days prior to Christmas, “So, Wanda, we’ll be expecting y’all to work over the Christmas holidays. And y’all goin’ need to send in your sales call reports at the end of the week. Here’s the fax number at my condo in Maui.” He was later let go for allegedly fraudulent expense activity. 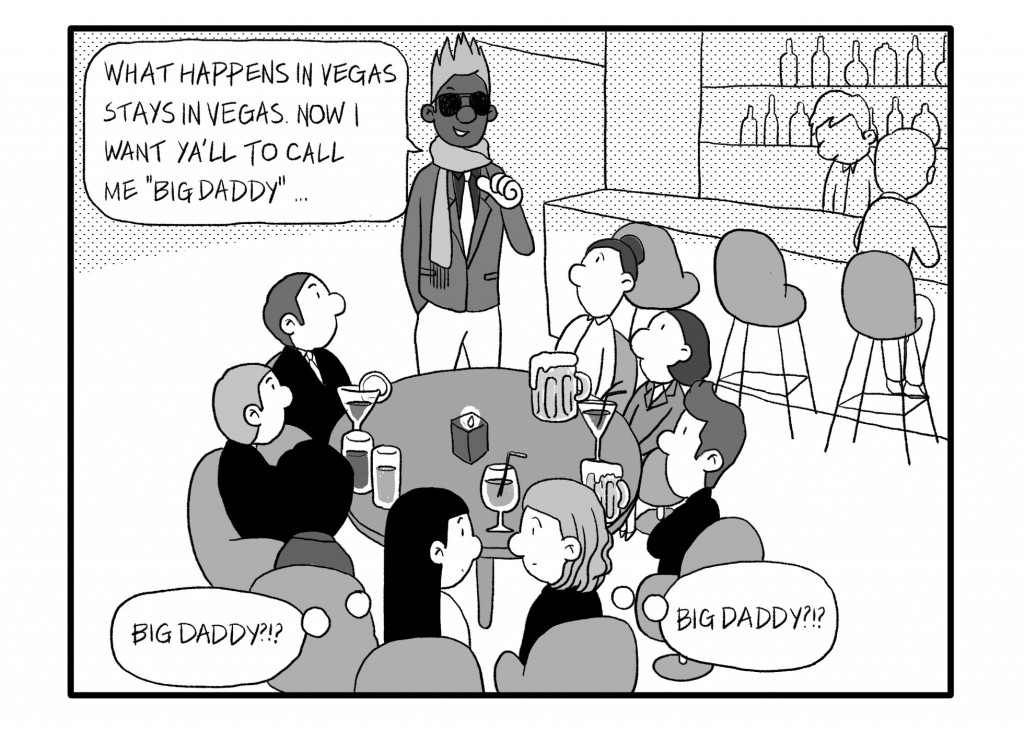 When I met the Italian owner of the above conglomerate, I was a little more than disconcerted to hear him speaking exactly like one of The Sopranos. But the frosting on my bottom happened at a trade show/sales meeting in Las Vegas.

Our international sales manager was one fine piece of work from the Deep South living in the la la land of California. This fellow was 6’5″ with bright yellow-blond hair and his face had an almost purple hue from over-tanning. He was brash and flamboyant and had a serious cocaine habit which made his moods swing from exuberantly ecstatic to the Devil Wears Prada.

When we arrived in Vegas, I was bunked with the only other Canadian on the trip—a sharp, fun-loving Korean-Canadian girl from Vancouver whom I hit it off with instantaneously. We were summoned to meet up for drinks with the international sales manager (whom I’ll call Chi Chi Sugarbaker) and the American sales posse.

“What happens in Vegas stays in Vegas. Now I want y’all to call me ‘Big Daddy’ while we’re here …” announced Chi Chi. My new friend Rhea and I looked at each other with saucer-wide eyes, the question obvious in each of our minds: Big Daddy? Is he kidding?

He wasn’t. Chi Chi had the American reps nibbling out of the palm of his hand, groveling for tidbits, which he was doling out like Daddy Warbucks. One rep got tickets to Cirque de Soleil and a crisp $100 bill. Another got a handful of $100 casino chips. Another was taken to an exclusive shoe store and bought a pair of red stiletto pumps. Two of the male reps were given a deluxe facial and shave at an expensive nearby salon. What did the two Canadians get who flatly refused to butt kiss or utter the words ‘Big Daddy?’ A big nothing. There are just some things a girl (or two) won’t do for treats.

You may have many of your own Dilbert-type cubicle experiences or on-the-road tales that have incited fantasies about starting your own business or have actually motivated you to become self-employed. I’d love to hear them.

My tales of life as a traveling sales rep with some of the scoundrels, swindlers, and nincompoops I’ve known could run in a comic strip column for years. My motto now is just say no to pant sniffing, pervs, or plebeians.

May the liberation of entrepreneurship open to all who dare to dream!

2 Responses to Who Wants to be an Entrepreneur?