The Upside of Vulnerability 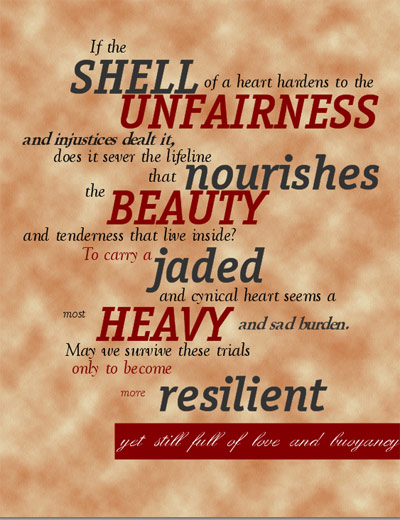 Quite a number of posts back, I was about to write about vulnerability when I was put to the challenge by both my school coach and mentor to be more transparent and open in my writing and so instead, I took the gauntlet and wrote with even greater vulnerability.

Upon my last post (Premeditated Acts of Kindness and Purpose Driven Beauty), my mum wrote me and in her protective, good-mothering nature, suggested that maybe I should reveal less about my life and circumstance. Especially in light of the fact that I would like to find love once again, she expressed concern that my raw honesty might scare off any would-be suitor should he read the blog.

And therein lies the splendid paradox of vulnerability.

One of the reasons why many want to write but don’t is because of the potential rejection, ridicule, and criticism. Publishing my writing for the world to see is one of the most vulnerable acts I’ve ever committed. When I wrote poetry in the midst of the most intense heartbreak of my life, I never dreamed I’d share it. But as fate would have it, I did.

By no stretch of the imagination is it Keats or Shelly, but in sharing it, I allowed women who read it to own their concealed anguish and realize they were not alone. The men who read it were moved and felt a greater understanding of women and how their own actions may have contributed to more fallout than they’d considered.

In being open to the risk of criticism by publishing it, the book became a bestseller (by Canadian poetry standards) and hit the ‘Top Twenty Books of 2004’ (#10) at McNally Robinson Books, which gave me a great sense of accomplishment.

Writing a travel memoir romantic in nature (something I’d wanted to do for a long time) required digging into a profound well of vulnerability. To put myself out there, naked for all to see my biases, blemishes, and behavior took a tremendous amount of courage.

But again, in doing so, I’ve received numerous emails from women and men telling me that The Cuban Chronicles had been a catalyst for their own Ah-Ha epiphanies or how much they appreciated the honesty and frankness with which I wrote it and that they too felt the many emotions with me along the journey. This feedback brings me bursts of bliss and keeps me believing.

The fear of disapproval can put a halt to many potentially great adventures, projects, or pursuits. I’ve tossed aside my need for knowing the outcome and for all manner of security to do what I value most—write—for whom I value most: real and good people. My tallest challenge is to live with the mystery in trust.

The quote that resonates loudest with my quest is, “And the day came when the risk to remain tight in a bud was more painful than the risk it took to blossom.” -Anaïs Nin

Brené Brown, a PhD researcher who has spent a decade studying vulnerability, courage, worthiness, and shame, says that vulnerability is the birthplace of everything—of innovation, creativity, and change. Think about it. Your grandest moments were likely born from your bravest vulnerability. Mine were.

In a highly unexpected twist, Brown’s Ted Talk, The Power of Vulnerability, went viral. In it she shares a deeply personal story about where her studies and statistics took her on her own journey. I speculate that the reason the talk has had 8.8 million hits (to date) is that we are all seeking the same relief from our hidden fears that make us feel weak or powerless.

Anyone who has ever been seriously ill, critically injured, or been given a dire diagnosis will tell you they have experienced gaping, raw vulnerability. All false pretenses fall away when we are faced with intense physical pain or our mortality. But our greatest gifts come in these somber hours when we learn how strong we really are, the depth of our faith, and what we truly value in our lives. 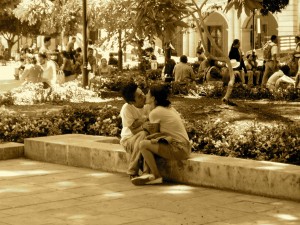 Not wanting to appear weak or be susceptible to hurt, it is in relationships that many of us put on our heaviest suit of armor to hide any flaws or frailties. Yet the only way to intimacy and whole-hearted relationships is through being emotionally exposed, without guarantees or certainty.

As Adele sings, “I remember you said sometimes it lasts in love, but sometimes it hurts instead.” (The incredible vulnerability in her song writing caused her album, 21, to surpass Michael Jackson’s landmark Thriller because millions of us could relate.)

Friendships and romantic liaisons remain shallow when we hide who we really are. There is no depth to a relationship when we only scratch the surface and pretend that everything is what it is not. Like eating a donut, I leave hungry and wanting for more when I visit with a friend and get only the superficial goods. I feel like I’ve been deprived of the honor of really knowing that person. I cannot help another if I do not know their pain or their strife. I cannot celebrate their greatness if they do not share all of themselves with me.

I watched a movie with a friend this weekend called Hope Springs, starring the endlessly talented Meryl Streep and Tommy Lee Jones. It had been labeled a comedy/drama, but my friend was in tears for a lot of the 100 minutes. It touched a sensitive nerve about her own failed marriage. 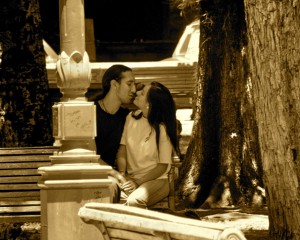 The movie epitomizes the damage done to relationships and self-esteem that is caused by the fortresses of emotional impenetrability we build through pride and misunderstanding. Thankfully, it also reveals what lies on the other side of letting go.

I was brought up to believe that one does not air their dirty laundry in public. It was a value my parents were brought up with and likely one that was passed down throughout the generations. However, our façades and dirty little secrets are our captors. Silence and secrecy grow like a dangerous fungus, suffocating happiness. Shame of who we are, what has happened to us, or what we’ve done can only be healed in light, not hidden in a dank basement of darkness.

The great cosmic joke of vulnerability is that the weaknesses we are all trying to conceal from each other, we all have. What a kicker! The paradox is that in trying to protect ourselves from hurt, we foster internal suffering. Being vulnerable means being susceptible to emotional injury but also to astounding joy.

Rather than numb (with food, alcohol, drugs, sex, TV, shopping, or gambling) and hide our frailties and failings, we run the highest chance of finding happiness, surprises, and love in unexpected places from unexpected people when we show up and allow ourselves to be seen in our entirety.

There is emancipation in honesty. If someone does not like you or accept you based on your truth, they don’t belong in your life anyway. For me, in writing with vulnerability and candor, I am allowing my life to heal and hopefully inspiring a few others along the way to do the same. For you, it may be telling your husband how you feel about your sex life. It might lie in finally dropping the mask with a good friend and speaking your shame. It could be a letting go of a need for perfection and being beyond reproach.

We all long for a sense of connection and belonging, of being seen and cherished for who we imperfectly are. What a wonderful world it would be if we all became each other’s liberators by openly living life by heart and telling our story as it is, not as we think it should be.

6 Responses to The Upside of Vulnerability