Don’t Talk to Strangers (Not!) 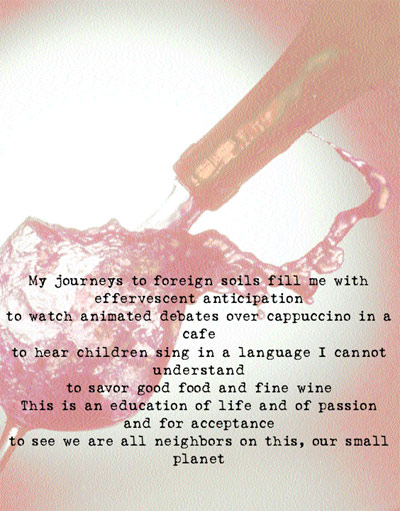 My passionate Latina soul was born in the prairie town of Moose Jaw, Saskatchewan. Stubble-jumping. Even as a little girl, I didn’t have much of a nesting instinct. I abandoned dolls early and was perpetually packing a sack to “run away.” I dreamed of adventures in other places and loved socializing.

After a couple of glasses of vino last week, I began regaling my friend, Vicki, with travel tales—my all-time favorite topic. She said I’d had good luck and that some of my stories were almost unbelievable.

If there’s one thing I know deeply in my heart, it is that I am here to investigate planet earth. I am not a high-octane adventure traveler and I haven’t visited 50+ countries (yet) like my friend, Joanne, but my soul’s calling is to travel and story-tell about it. And I think that’s why I’ve had some amazing experiences doing what I love. But my biggest gift is that I never listened to the advice, “don’t talk to strangers.”

In my mid-twenties a friend and I made a last minute plan to go to San Francisco. Thinking ourselves daring and adventurous, we didn’t book a room. We hadn’t factored in the possibility of a flight delay and we landed close to midnight. An adorable young man had sat across from us on the flight and we briefly chatted.

Nick noticed our creeping panic at the luggage carousel and had ascertained that we didn’t have accommodations. He was taking a taxi home and politely offered a room for the night with he and his father in the Bayview area. We decided to take him up on it and agreed that if it looked like a scary venture, we’d carry on and take the taxi downtown.

His father was a wonderful Greek man who greeted us at the door like long-lost relatives. He poured us a drink and we were set up in a cozy guest room.

In the morning, Nick knocked gently on the door. He brought in a breakfast tray with coffee, croissants, and a paper. My friend and I looked at each other with wonder. He said that he and his father had discussed it and they would like it if we stayed for the whole trip. His father was quite lonely since his divorce and would love the company. Nick drove us about and his father took us on a tour, fed us, and loved us as his own. 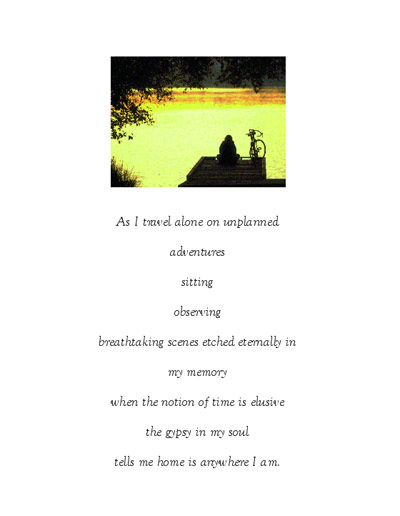 In the mid-’90s on a train from Florence to Venice, I was seated in a car next to an American man with a strong Southern drawl. We struck up a conversation and he told me he was traveling with his twin 20-year old daughters, an annual tradition. As we got close to Venice, Ray invited me to dinner with them. Thankfully I dressed well for the posh, gorgeous Italian restaurant. We had a blast.

Through numerous phone calls, I found Ray five years later in Chicago to share news of my freshly published Circle of Life Series. I told him how his daughters had inspired me to begin writing. We had a four-way conference call and I mailed off the books, much to their amazement.

On the island of Santorini, my girlfriend and I danced the night away at a hot beach bar. I bopped the Cotton-Eyed Joe on the bar, which seemed to endear me to the bartender (I also cut my foot on some glass and felt something hot and sticky—my own blood—and was ministered to by the staff, but that’s beside the point.)

Later, we were invited to an all-night Big Fat Greek Family Party. Just like in the movies, Greek men danced arm-in-arm, ouzo flowed, delicious food was served on big platters, and we were in the company of two very cute Greek boys until the wee hours of the morning. Opa!

A few years later on the gorgeous Cycladic island of Mykonos, you couldn’t help but talk to strangers. The Greeks kept an eye on everyone and knew the instant my friend had left. They also knew that I was moving to a new pensione. It was a Friday when she left and I meandered down to the pier side ATM to get cash for our room charge. Nada.

A waiter at the nearby café noticed and handed me a wad of cash. Understand that this island is hopping with “gone wild” tourists of every imaginable sort who are constantly coming and going.

“You need money? Here. Take some.”

“No! I couldn’t borrow money from a stranger,” I said.

I tried the three machines on the island and all were down. I stopped off at the high-end sunglass shop and asked the friendly young owner to try my cards, which all worked. He said he was sorry that he had no cash to lend me.

I then went for a cappuccino and sat on the patio, people watching and trying to figure out what to do. The owner sat down across from me.

“Well, the bank machines are all down on the island and the owner at Pensione Nana will not give me my bags or passport until I pay.”

“That crabby old thing? She has more money than God! Here.”

He too pulled out a handful of cash and handed it to me.

“What else will you do? You take it. You pay me when the bank fixes everything.”

That night at a little café-bar, the sunglass guy ran up to me out of breath.

“There you are! I’ve been looking for you. I was so worried. Here.” Another fistful of cash.

I wasn’t able to repay the cappuccino man until the following Tuesday, but I did return the money with a huge bouquet of flowers I’d bought at the pier where the craggy old flower vendor gave me an extra bouquet for my room just for my smile. 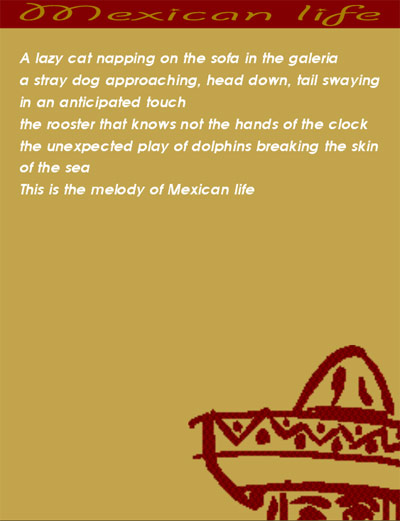 One of my favorite stories is how my love affair with Mexico began at age 22. I was traveling with two friends on our first trip to Mexico—another blonde and a brownie. The blonde, Tracy, loved playing the ditz. She was anything but. The brunette, Brenda, was a shy girl who’d reluctantly agreed to leave her boyfriend for a chica vacation.

We’d booked a beautiful two-bedroom condo on the 29th floor of a seaside hotel in Acapulco for two weeks.

Our first encounter was with two young men from Mexico City. They took us out for lobster dinners and entertained us for a long weekend. They invited us to stop in Mexico City for a visit on our way home and called us frequently at the hotel. We had no experience with Mexican life and did not know that at that time, there was a wide and distinct class separation between the rich and the poor with an almost non-existent middle-class.

Our second encounter was with a group of four Italian clothing designers. We nicknamed one Fettuccini Alfredo and another Walrus Jaw Bookend (we were weird and nicknamed almost everyone). The two sexy ones were Aldo and Giorgio.

These four found great pleasure in taking us out for elaborate, five-course Italian dinners every night of their vacation and bringing us along on a big fishing adventure where they caught a 9-foot sailfish. They weren’t getting lucky (but kept valiantly trying). When we offered to buy drinks one evening at a nightclub, they threw our money on the floor, insulted that a woman should offer to pay (Canadian men, take heed).

Our third encounter of the wildly fun kind was with the sexiest Brazilian men you’ve ever seen. They were riding their Harleys from California to São Paulo.

They took us for dinner and touring the cliffs of the bay on their bikes, helmet-less, with our hair blowing in the wind (I’m alive, so it’s all good) and feeling like Easy Riders.

Brenda, the brownie, had a (platonic) side-encounter with Tony Pepperoni who cooked Italian for us.

Our flight home had a short layover in Mexico City and by that time, I was pumped to stay on with our new Mexican friends. The blonde was in, the brownie—no way. By the time we landed, Tracy had chickened out. But I hadn’t. One of the Mexicans came to pick me up at the airport and our first stop was his parent’s villa. Imagine my surprise when I saw seven cars lined up inside the gate and a butler (or maidman) answered the door.

I met his very proper and polite father and then we went to Fernando’s condo where Ernestina, the maid, began wildly pointing at my bag and speaking in rapid Spanish. I agreed to whatever she was asking, although I had no idea what she’d said.

Fernando stopped at a flower stand and bought me two dozen roses for my room, picked up his friend Hector (from the Acapulco trip), and we went out for an outrageously delicious dinner.

When I got back to my room, I found all of my dirty clothes laundered, ironed, and neatly lined up in the closet.

I spent the week being toured around the colossal Mexico City with Hector by day going from shoe shopping to climbing the pyramids, and being taken to restaurants and beautiful Mexican homes with incredibly kind people with Fernando by night.

Fernando had given my plane ticket to his parent’s butler to change my flight for the following week. I only realized when I took my seat that he’d changed my ticket to first class. 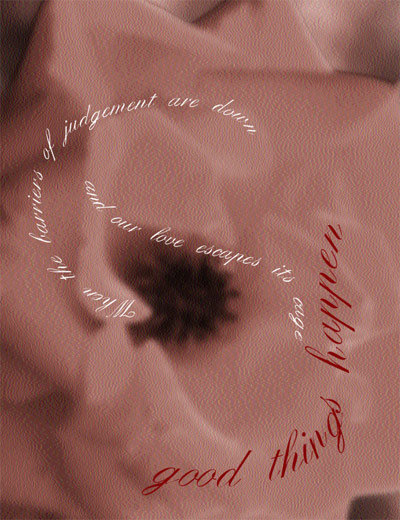 Talking to strangers has brought me the most rewarding moments of my life. One must always use their gut intuition and practice caution, yes. You don’t need to chance a stop off in Mexico City. You can have wonderful experiences chatting with strangers in your own neighborhood. The other day I teased a man looking at women’s shoes in “The Village.” He ended up telling me about the loss of his nephew who had been hit by a car and he looked relieved to speak his burden aloud. Sometimes speaking to a stranger can lighten their day or it can make yours.

Even though my comments to strangers in Calgary are sometimes met with blank stares, I feel that—especially in a culture like ours (Canada)—we need more active engagement in conversations with strangers. In a fast-paced, money-driven society, it gives one a much-needed sense of community and oneness.

This man took talking to strangers to a whole new level and started a movement. You may want to join in. Who knows what absolutely awesome adventures await you?

6 Responses to Don’t Talk to Strangers (Not!)